I watched the first Lupin the Third film, The Secret of Mamo from 1979, again after not seeing it for a few years. I already knew Yuzo Aoki was involved as co-animation director, but I remembered the animation being a lot more limited than it actually is. While it's not quite as wild and full as his later work with the series in the 80s, it's still a joy to watch. 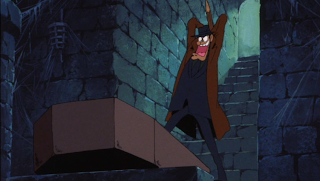 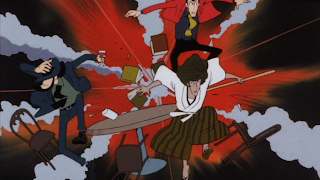 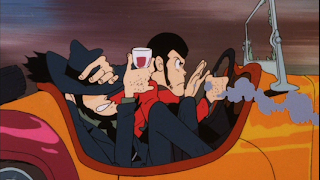 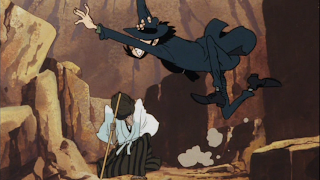 While the story feels a little overlong and maybe gets too absurd towards the very end, it's a really fun film. It's certainly more coherent than the later Gold of Babylon film, and while it's not as much of a general audience crowd-pleaser as Miyazaki's Castle of Cagliostro that followed it the next year, it's much more faithful to the original Lupin III comics in terms of humour, art and characters. Their relationships are explored in a really raw, mature way, more so than any of the other Lupin films. The sexuality is more overt (though still not nearly as explicit as the new 2012 series) and long-standing tensions that are usually only briefly mentioned finally come to the surface and affect the storyline, such as Jigen and Goemon's differing philosophies, their mutual resentment of Fujiko, and Jigen's brother-like relationship with Lupin. Similar to what I said in my post on One Piece Movie 6, this stuff probably won't be as enjoyable for viewers who aren't already familiar with these characters, but I think it would still be entertaining. 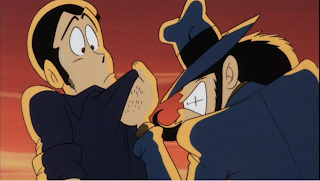 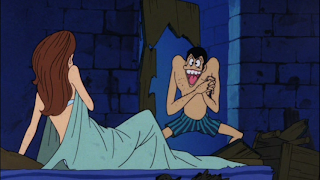 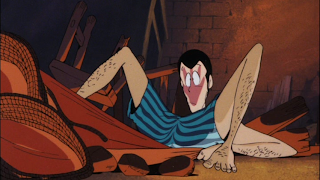 It's probably the funniest Lupin movie, which is good because Lupin is supposed to be a comedy, something that the new series doesn't seem to realize. 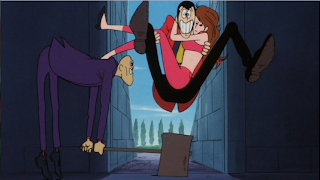 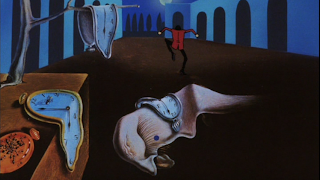 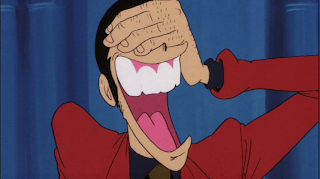 It's also a very atmospheric movie. The desert scenes feel almost unbearably hot, because of the extreme lighting and the music. 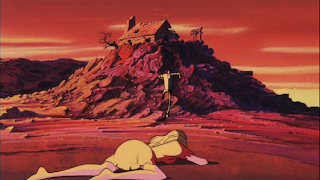 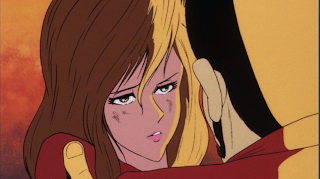 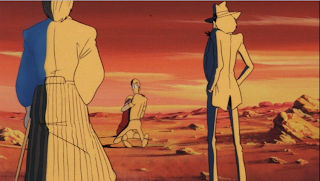 I think Cagliostro is probably a better movie overall, even if Lupin's personality is severely watered-down in it. It simply has better, more focused storytelling, but obviously it's hard to compete with Miyazaki in that department. On the other hand, Mamo is a much more authentic, pure Lupin experience, so if you're looking at it in terms of how it fits into the larger franchise, it might win out. Their contrasting approaches are exemplified in their animation. Both are well-animated, but in drastically different styles. 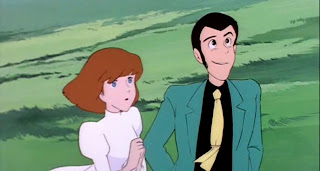 Cagliostro (seen above) has soft, rounded, "cute" designs, and the movement is very naturalistic and smooth. The characters are basically stock Miyazaki faces and designs dressed up as Lupin and co. Mamo (as seen in every other picture) has lanky, angular designs with exaggerated features, and the movement is more stylized and over-the-top. I can see why this harsher style wouldn't appeal to as many people, since the characters sometimes resemble stick figures, but I think it works just as well... Apples and oranges, you know...

Anyway, this post was basically just an excuse to share some cool drawings from the movie, so here are some more. 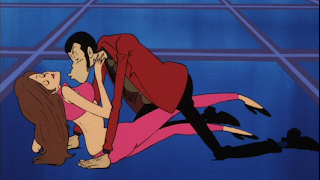 This sequence, where they look inside Lupin's mind, never fails to make me laugh. We see live-action photos of naked women, with Zenigata and Fujiko popping up and finally Lupin himself, seemingly in a commercial for some orange candy. 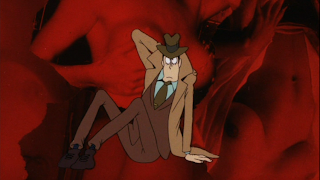 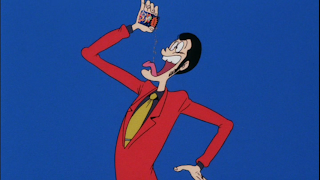 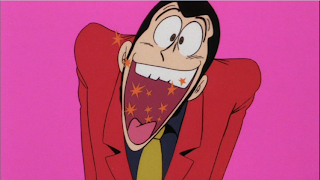 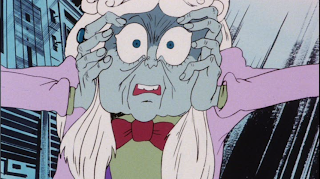 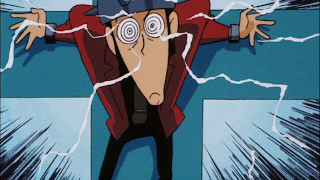 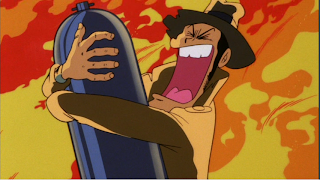 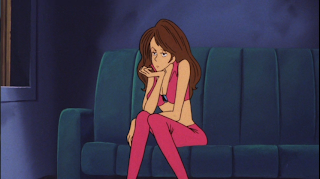 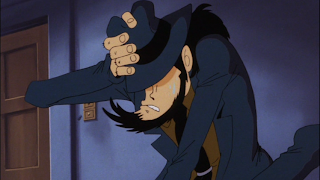 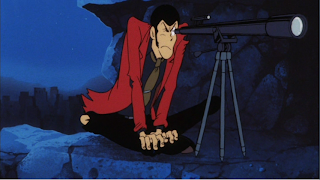 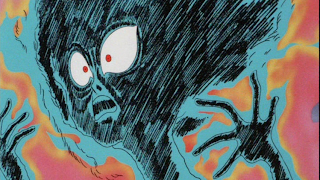 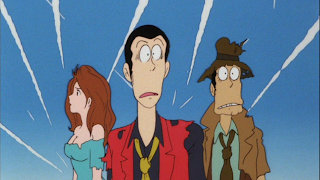 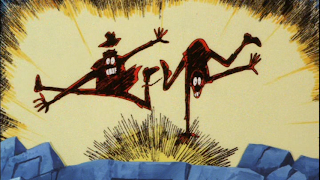 The lady with the grey skin almost looks like a Katie Rice drawing! I really need to see this...

Nice, I'm glad you posted about Mamo. It's funny, when I first saw Mamo years ago I thought it was just a weird, bizarre Lupin movie... entertaining, but without the power and dramatic weight of Cagliostro. Cagliostro was the real Lupin to me. It's only years later that I came to realize the error of my ways... Now to me it's a no-brainer: Yes, Cagliostro is probably the better movie, but Mamo is more authentic and dangerous, and the drawings are way more delicious and fun. Aoki's Lupin is where it's at.

It's true, Aoki's drawings weren't yet as wacky out as they got years later on the Babel movie. The drawings have the more simple and skinny shapes of the red jacket show. But it's still fantastic stuff... Certainly already wacky compared with Cagliostro from the following year. Every drawing you posted so delicious and fun. I've been looking forward to re-watching it, and these drawings make me want to do it really soon! Some of the drawings you posted scream Yoshio Kabashima (like Lupin in his trunks), which you may recognize now that you're familiar with the diamond robot episode. I can't get enough of Kabashima's work, so with Aoki on top of that, I know I'll enjoy the movie even more now than when I first watched it long ago... Plus it will be a nice change from the (mostly) boring animation of the new show. :P

Zoran:
Actually it's a guy. Rumour has it the animators based him on Paul Williams.

Ben:
I agree, the new show has its merits but I was hoping for more funny animation, given all the talk of returning to the manga style, and the nicely exaggerated designs.

About Yoshio Kabashima, I haven't seen much of his work apart from the little bit of red jacket Lupin stuff I now know he did, so I can't recognize his input was as easily as Aoki's, but I'm going to have to look him up too.

It is when it tries to be, but most of the time it's pretty serious. Of course, that's not an inherently bad thing, but I was just hoping for more comedy. Now that we've gotten past the individual character introduction episodes and they're starting to interact more, I'm starting to like it more. The most recent episode was really good.

Hey, I'd really like to thank you for responding to my comment about the Lupin manga some time ago, and the tidbit about the art getting much better in World's Most Wanted. I did get WMW volume 1 and I absolutely love it; everything I found fun about the old TV anime stuff done even better with great art comedic timing.

I'm happy I could help, busterbeam! Glad to hear you're enjoying the manga.